Alchemy and Kabbalah in the Tarot: Arcanum 13

Let us now study the Thirteenth Arcanum of the Tarot. This is the Arcanum of Death.

Indeed, death is the return into the womb. Life and death are two phenomena of the same thing. Death is the difference of whole numbers; only the values of the consciousness are what remain after this mathematical operation is completed. These values (when seeing them clairvoyantly) look like a legion of phantoms that continue. The return of these values occurs in the mechanism of Nature. Indeed, the soul does not reincarnate, because the human being does not have his soul incarnated yet. Only the values are what return and incarnate.

The Embryo of a Soul

Present humans only have an embryo of a soul; this embryo can be developed and strengthened by means of Sexual Magic. Often this embryo believes that it is whole and forgets its origin; when this occurs, we totally fail.

Humans must attain immortality, because they do not have it. Only those who have incarnated their soul are immortal.

It is stated that humans have one mind, yet we state that each human has many minds. Each phantom from the pluralized “I” has its own mind and even self-independence. Present humans are dormant machines driven by the legion of “I’s.” We need to engender the Christ-Mind.

Common and ordinary people do not have a true identity, because only those phantoms of the pluralized “I” are expressed through them. Thus, after death each human is a legion.

Present humans confuse the force of desire with willpower. We need to engender Christ-Will. 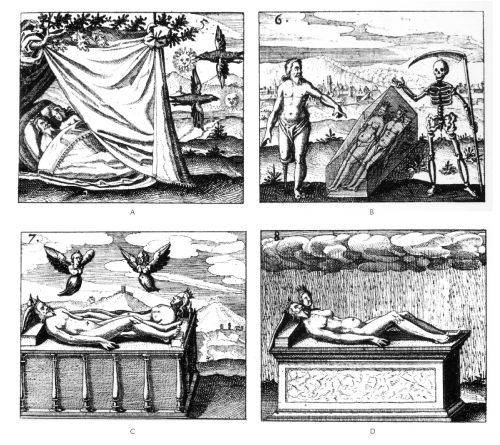 The Adept and his/her spouse must work together in the Laboratorium Oratorium. The king and the queen perform their alchemical combinations in the nuptial chamber [see figure a]. Outside of this royal chamber, the ravens of putrefaction devour the Sun and the Moon (blackening and putrefaction of the internal chrysalides or bodies of sin); within a tomb of glass [figure b] the bodies of sin become putrid; this tomb of glass is the glass of alchemist. The souls rise up to fly [figure c] (symbol of the butterfly that comes out from within the chrysalis, a symbol of the Christified vehicles that come out from within their chrysalides). A hermaphrodite body (Sun and Moon) comes to life with the heavenly influence of the dew (the Ens Seminis). The hermaphrodite body [figure d] encompasses the internal Christic vehicles that were engendered by means of Sexual Magic. All of these Christic vehicles penetrate and co-penetrate without confusion. When a person has these vehicles, he/she can incarnate his/her soul. Without having these Christic bodies, no human being is a true human being.

The Retort of Alchemy 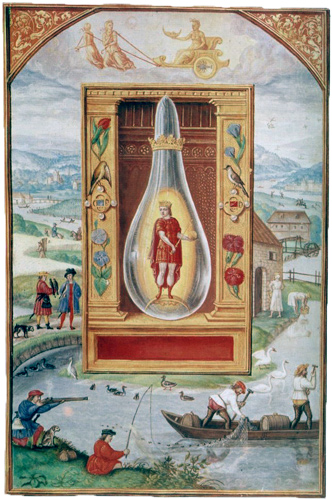 When arriving at this step of the work, the venerable matter has converted itself into a very gorgeous child glowing with beauty. This is the Soma Psuchikon, the Body of Gold; we can consciously visit all the departments of the Kingdom with this precious vehicle. Then, by giving new properties to this Alchemical alloy, the Astral-Christ appears within the astral phantom; this is a very precious child who grants us immortality. After this second body has been created, the problem of integrally comprehending all of the acquired powers and knowledge arises. This problem is only resolved when the Christic intelligence is given to this Alchemical alloy. Thus, the precious vehicle of the Christ-Mind happily rises from within the Retort of the Laboratory; this vehicle emerges from within the mental phantom.

After this work has been completed, something is still missing. Christ-Will is what is missing. Thus by intensely reheating the Retort of the Laboratory, a Divine Child comes to life; this is the Christ-Will, the Divine Body of the Soul. Those who have succeeded in creating all of these Christic Vehicles within the Alchemical Retort can incarnate their soul totally and integrally. Only those who achieve the incarnation of their soul deserve the precious title of Human. Only these true humans can elevate themselves up to the kingdom of the Human-Being, the Superhuman, the Super-Man. Only these true Human Beings can receive the Elixir of Long Life.

After each one of the great Initiations of Major Mysteries, the Ethereal, Astral, Mental, and Causal phantoms are similar to scales that have been discarded by serpents, or as chrysalides that have been discarded by butterflies (after they have flown away). Precisely after the Great Initiations is a work for Humans, Angels, and Gods: to disintegrate the shells and to dissolve the pluralized “I.” Ahamsara, the karmic remnants of the Gods, are precisely those phantom-like “I’s.”

Every true human being that incarnates the Soul can ask for the Elixir of Long Life; this is a gas of immaculate whiteness; such a gas is deposited in the vital depths of the human organism.

In the supersensible worlds of hyperspace, holy women treat the body of the initiate with perfumes and aromatic ointments. Then, by obeying superior orders, the physical body penetrates within the Astral Body (through the top of his sidereal head). This is how the Master once again possesses his physical body. This is the Gift of Cupid. After the Resurrection, the Master does not die again; He is eternal. The Yogi-Christ from India, the immortal Babaji, and his immortal sister Mataji, live with the same physical bodies they had more than a million years ago. These immortal Beings are the watchers of the Guardian Wall that protects humanity.

Immortal Beings can appear and disappear instantaneously. They can make themselves visible in the physical world. Cagliostro, St. Germain, Quetzalcoatl, and many other immortal Masters have performed great works in the world.

First, we must become complete Humans; thereafter (after resurrection) we elevate ourselves into the Kingdom of the Super-Human. Present humans are nothing more than human phantoms.