Aztec Christic Magic: That Which Has Never Been Explained

That Which Has Never Been Explained

And Jehovah Elohim planted a garden eastward in Eden; and there he put the man whom he had formed. And out of the ground made Jehovah Elohim to grow every tree that is pleasant to the sight, and good for food; the tree of life also in the midst of the garden, and the tree of knowledge of good and evil.

And Jehovah Elohim commanded the man, saying, Of every tree of the garden thou mayest freely eat: But of the tree of the knowledge of good and evil, thou shalt not eat of it: for in the day that thou eatest thereof thou shalt surely die. 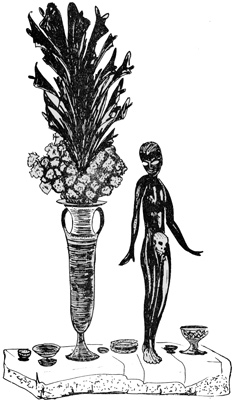 A small strange statue stood upon a little Indian altar, which was covered with golden and bronzed cups. Upon the altar, in a silver jar, a bunch of enormous black candles and red flowers stood. The statue was carved from a very pure piece of black onyx; it was of a completely naked goddess, androgynous in form, demoniacal and enthralled. It had fragile arms, a very well molded torso, and depressive hips. Engraved within her eyelids were two emeralds that shone in an extraordinary manner and between her well shaped thighs under her lower abdomen, a mocking and menacing small skull was upon her sex.

Man and woman were born to love each other. Therefore shall a man leave his father and his mother, and shall cleave unto his wife: and they shall be one flesh. The man and the woman were both naked and were not ashamed of it because they still had not eaten from the tasty forbidden fruit, which was pleasant to the eyes.

That forbidden fruit is sex. However, the sexual, instinctual serpent was more astute, and said unto the woman:

Yea, hath God said, Ye shall not eat of every tree of the garden.

Yet, the sexual, instinctual serpent seduced the woman, and said unto her:

Ye shall not surely die: For God doth know that in the day ye eat thereof, then your eyes shall be opened, and ye shall be as gods, knowing good and evil.

In Eden, human beings were innocent because they still had not fornicated. Men and women from Eden ate from the fruits of the Tree of Life, because the four heads of the (sexual) river of the pure waters of life nourished the roots of the trees of the garden.

Men and women from Eden enjoyed the delights of love within the profound forests of an ancient continent that they called Lemuria.

And when the woman saw that the tree was good for food, and that it was pleasant to the eyes, and a tree to be desired to make one wise, she took of the fruit thereof, and did eat, and gave also unto her husband with her; and he did eat.

And the eyes of them both were opened, and they knew that they were naked; and they sewed fig leaves together, and made themselves aprons.

This is how they fornicated.

Therefore Jehovah Elohim sent him forth from the garden of Eden, to till the ground from whence he was taken. So he drove out the man; and he placed at the east of the garden of Eden Cherubim, and a flaming sword which turned every way, to keep the way of the tree of wisdom.

The human being lost his divine powers when he violated the sixth commandment of the law of God that states:

Thou shalt not fornicate.

In ancient times, men and women were true magicians who had power over the fire of volcanoes, over the wind and hurricanes, over the torments of the sea, and over the great earthquakes.

When the human being fornicated, he had to work in sorrow because he lost his divine powers; thus, thorns and thistles were what he brought forth from this valley of tears.

In ancient times, when the human being still had not departed from Eden, the sexual act was only performed within the sacred precinct of the temples of mysteries and under the guidance of the angels. This is how uncorrupted men and women were born within the thick jungles of Lemuria.

Before falling asleep (always at your own particular hour), lie down, face up, on your bed. Relax all of the muscles in your body and make your mind blank. You must not think of absolutely anything for thirty minutes. This practice should be done six days out of the week.