In the museum of Anthropology and History of Mexico City is found Xochipilli seated upon a beautifully carved basalt cube. He has his knees up high and his legs crossed like the cross of Saint Andrew, his hands above his knees with their respective index fingers and thumbs in contact. His sight is towards the infinite. He wears great earrings made of jade, an armored chest with tassels that end as tiger paws or serpent’s fangs, and upon the center of his armor are shown two suns with a big half moon upon each one of them. He has bracelets and kneecaps that are finished as six petaled flowers; leg-armor with paws which seize his ankles, and upon his leg-armor there are two bellflowers whose corollas downwardly spread, one with six seeds and the other with fire. He is wearing cactlis whose lashes are graciously knotted upon his feet. Xochipilli: xochitl, “flower;” pilli, “principal;” God of agriculture, flowers, music, song, poetry, and dance. “Flowers and chants are the most elevated things that exist on the earth so as to enter into the ambits of the truth;” this is what the Tlamatinime taught in the Calmecac. This is why all their philosophy is tinted with the purest poetic tinge. The face of Xochipilli is impassible, yet his heart overflows with happiness.

The annals state that Sun-4-Air, or Ehecatonatinuh, is Quetzalcoatl, the luminous dragon, hermaphrodite God of the winds that blows from the east throughout the four cardinal points. His consort or equal is Cihuacoatl, the woman-serpent. Quetzalcoatl arrived from Venus and returned to Venus. Therefore, when the Sun is still over the horizon irradiating its last rays of gold, the afternoon star, the soul of Quetzalcoatl, starts to shine with its first trembling light.

After the Sun-4-Ocelotl, Quetzalcoatl bled his phallus and made penance with Apantecuhtli, Huictlolinqui, Tepanquezqui, Tlallamanac, and Tzotenco in order to create the human beings who would populate Anahuac anew. Such a sacrifice was performed in Tamoanchan (“house from where we descended”) and made possible the entrance of life within the bones of the giants who were devoured by the tigers, and who were brought by Quetzalcoatl from Mictlan. Human beings are the fruits of the sacrifice of the Gods. They deserved them through their sacrifice; this is why they call them Macehualli (“the ones who are deserved by the Gods”).

Two Xiuhcoatl face each other on the inferior part of the Aztec calendar. The faces of two personages appear within their jaws. The one on the right is wearing the same crown, the same nose ring, and the same earrings of Tonatiuh. This double personage is Quetzalcoatl, who is united by his flinted tongue to his consort or equal, Cihuacoatl, who wears a blubbery-lip and covers her face with a veil. They are the fallen ones, Adam and Eve, fallen because of their transgression of the Law of God: Thou shalt not fornicate.

The Nahuas only adopted ideographic writing in order to transmit us their philosophy; this is why they had to carve so many sculptures in order to speak, in each one of them, about the attributes of the Divine Couple, Father and Mother of all Gods and humans.

Quetzalcoatl is the Cosmic Christ who incarnated among the Nahuas in order to teach them how to live in accordance with the laws of God and in order to give them his message of triumph: In the world ye shall have tribulation: but be of good cheer; I have overcome the world. - John 16:33

Quetzalcoatl projects himself into Xochipilli, who has the symbol of this great deity upon his chest. The feline paws, on the tassels of his armor chest, are the same ones that at the side of the face of Tonatiuh are scratching hearts; this is a symbol of the sacrifice of emotions in the initiate; it is impossible to reach God without such a sacrifice.

The crowds of the Nahua religion celebrated the festivity of Xochilhutl in which, during four previous days, it was commendatory, one time a day, to eat only cornbread made without salt, and if you were married to sleep separated from your spouse. The fifth day they publicly offered to Xochipilli dances and chants accompanied with teponaztli and drums, ovations of flowers recently cut, and breads with honey from bees within which they placed an obsidian butterfly, a symbol of the believer’s soul. 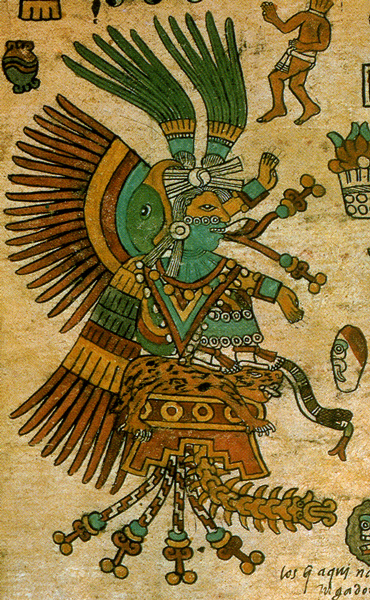 Xochiquetzal is the Goddess of love, the consort or equal of Xochipilli, whose haven is in the Tamoanchan, the deposit of the universal waters of life that in the man is located in his zoosperms. Tamoanchan is a paradisiacal place carpeted with flowers, rivers, and blue fountains. The xochitlicacan tree grows in the Tamoanchan; it is such a marvelous tree that it is enough for the enamored ones to stand under the shelter of its branches and touch its flowers in order for them to become eternally happy.

Never has any man seen this deity; nonetheless, the Nahuas represented her young and beautiful with her hair over her shoulders and a gracious trimming on her forehead, red leather bracelets with protruding tufts of quetzalli feathers towards her elbows, earrings of gold in her ears, and a small jewel of the same metal in her nose, a blue blouse embroiled with flowers and multicolored feathers, and a polychrome skirt and bunches of fragrant roses on her hands.

Her temple was inside the major temple of Tenochtitlan, and although small, it displayed carpets embroiled with precious feathers and golden ornaments. Xochiquetzal had the power of forgiveness. Pregnant women, after having had a lustrum bath, went to her temple in order to confess their sins and to ask her forgiveness and help; however, if the sins were very great, then, an effigy that was molded in amethyst paper (ficus petiolaris) that had the likeness of the penitent was burned at the feet of this deity.

A ceremony offered to Xochipilli had a place in the Calmecac: Calli: “house;” Mecatl: “cable, rope; long and narrow corridor within the interior rooms of a building.” Eleven children, all of them nobility’s children, while forming a circle, performed chants and dances; when dancing, they went three steps to the front and three steps in reverse, six times; at the same time, they graciously agitated their hands. A child kneeled in front of the fire that burned on the altar; he silently prayed for the daily bread, and another child remained on guard standing at the entrance of the temple.

This ceremony endured as long as the infantile dances endured, and should be celebrated in the first night when the fine silver sickle of the new moon appears in the sky. The director of the Calmecac, standing between the child who prayed and the dancers, with his forehead towards the altar and with his face impassible as the face of Xochipilli, collected the vibrations from the infantile praying and from the chants and from the dances; and while raising his dark hands towards the heavens that now represented a flower, silently pronounced the mystical and ineffable word that assigns, defines, and creates, and that the children pronounced in chorus:

Not like those gluttonous, disobedient, and spoiled brat children, but like those children who are humble and confident in their parents, who give them everything that they certainly need.

We can invoke Xochipilli on Fridays from 10:00 p.m. to Saturdays at 2:00 a.m. He makes the Wheel of Retribution spin in favor of those who ask him and who also deserve it. Yet, he profits by every service, because he cannot violate the Law.

In the interior of the Temple of the Sun, the Ocelot Knights and the Cuauhtli Knights celebrated another ceremony on the first Thursday with the new moon; they attired themselves with helmets made with the shapes of tiger and eagle heads; all of them wore on their necks tufts made with feathers of quetzalli, a symbol of the fight that they have to sustain against evil on the Earth; they also held in one of their hands a bunch of roses, and on the other a mace covered with tiger skin and eagle feathers, a symbol of power; they also had bracelets on their wrists and armor on their calves. There were dances and ritualistic chants in this ceremony, and one of the Tlamatinime (“mirror honored in itself, an organ of contemplation, concentrated vision of the world of things”) finished the ceremony with the following prayer:

Lord from whom we live, owner of the ‘near’ and of the ‘faraway,’ we give you thanks with happiness for our Lord Quetzalcoatl, who with the sacrifice of his blood and his penance made your life to enter within us. Make us strong as he is, make us happy as he is, and make us just as he is.

“So be it,” was uttered by everybody in chorus.

Each Thursday, after a prayer (whichever you might be familiar with) to God and to the Masters, you must start the study of the chapter that corresponds to that particular week. After you finish with the study, sit down comfortably on a chair; this chair must be the one which you commonly use in the sanctum sanctorum of your home and the one which you must not use for other purposes. Relax your whole body; let your mind go blank for a few minutes and become totally quiet. After you have achieved it, expand your consciousness from within to without; see from within how your consciousness expands upward, downward, sideward, all ways around your body. See with your consciousness the color of your shirt, of your scarf, of your suit, and of your shoes. Be aware that your body is relaxed and in an aesthetic position. Observe how your room is arranged, your furniture, pictures; you must identify everything before embracing the streets of the whole city where you live; identify them, feel how the vehicles run, and likewise, expand and expand more and more your consciousness until it embraces the whole Earth. Afterwards, embrace the space without limits where the suns and sidereal worlds move.

This exercise must endure one hour and must be performed for thirty days, with the exception of Sundays.