Description of Stela B: Mayan Tlaloc

This stela shows Tlaloc, the god of rain.

The simple fact it is carrying a miter clearly tells us about the great priesthood, an initiate, a great priest.

The attitude of its hands indicates the region of Tiphereth and the necessity of orienting our energies inwardly and upwardly.

The pectoral on the zone of Tiphereth, on the center of its chest, with two upwardly angles towards its cheeks, indicate that we must pay attention to the deep, animating principles of our Being, which are what really count.

The Mayans knew the esoteric mysteries in depth. Each sculpture in itself indicates this. 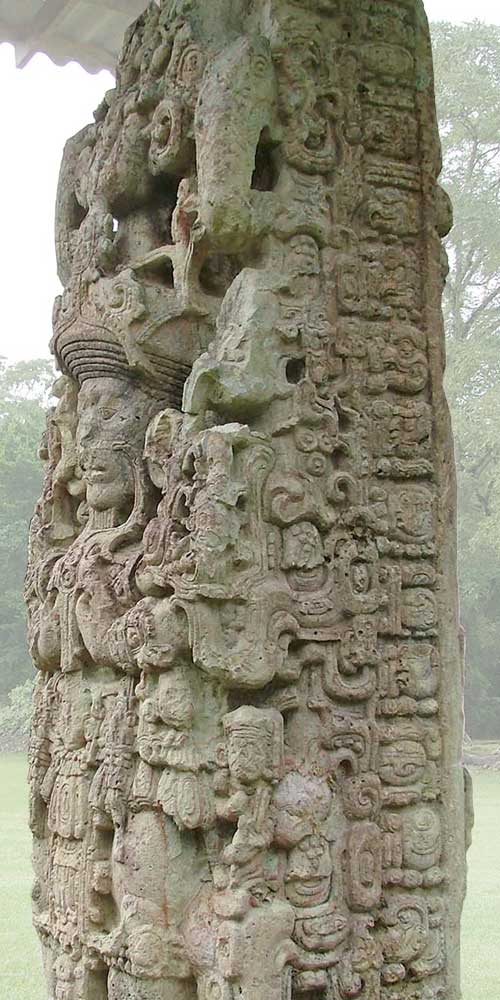 At its sides we can appreciate the guacamayas, a clear symbol of chastity. The guacamayas also represent sulfur and the mercury of the wise.

To have a better explanation of what is said about the sulfur and the mercury, let me tell you that the sacred sperm must be transmuted into creative energy, which—impregnated by fire or by becoming one with the fire—rises through the dorsal spine. This is the igneous serpent of our magical powers.

The entire work is based on mercury and sulfur. Without them, the Great Work cannot be performed.

On this stela, sulfur and mercury are very well represented by the pair of guacamayas. These were made by initiates who knew what they were doing. We can see that the initiates who chiseled these stones knew esoteric culture in depth.

In other cultures, sulfur and mercury are represented in different ways, such as by the unicorn and the horse, by the eagle and the fox, by the two fish of the constellation of Pisces, by the two colossuses of Rhodes, etc. All of these allegories are nothing more than the sulfur and mercury of which the alchemists from the middle ages often spoke.

Whosoever possesses the physical, Astral, Mental, and Causal bodies receives the animistic and spiritual principles, and becomes a true human being. Before having them, one is an intellectual animal falsely called a human being.

Sequentially, in the sacred texts of ancient cultures, mercury and sulfur are represented in different ways. Here in this stela "B," they are represented by the two guacamayas, which are also a symbol of chastity.

The scepter is wisely placed in the center.

An undefined, strange, and unusual face is displayed; it is placed on the superior part of the scepter, as if indicating the marvelous neutral or third force.

When the scepter is oriented towards the waist, towards Hod and Yesod, it indicates, in Hebraic terms, about the neutralizing force. Indeed, it is the third force that is necessary to learn how to drive, how to control, because this is the force that gives power.

The two witnesses of the Apocalypse (Revelation) are on the sides of the dorsal spine, while the third force is in the center.

The two witnesses put the third force into activity; this is the sacred ray of Kundalini. The scepter of command belongs to the third force. Here on this stela, it is very well explained with that very strange, very neutral face.

The chiseling of this stone is extraordinary; it has been done with admirable perfection.

Stones as rich as these cannot be bought, not even with all the gold of the world. As artistic work, they are very impressive; they give the idea of a figure and a mantle at the same time. 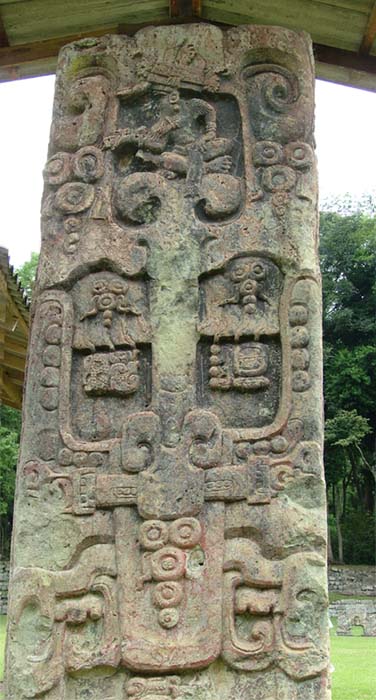 Posterior part of Stela B

We see a figure that with his hands is distributing the beneficial rain. This little figure's seated position is a Buddhist attitude. There is no doubt that it is necessary for all the universal floods to fall upon us in order to totally clean and purify us; thus, this is what the Mayan Tlaloc from Copán indicates.

In synthesis: all of these stelas are very antique carvings; they are made by artists, by geniuses endowed with an extraordinary wisdom, which they pour within these books of stone that clearly speak to us about the realization of the Inner Self, the Being.

Who is Tlaloc? He is a king of nature; he is a perfect creature who is beyond good and evil. Inundation, drought, hail, ice, and lightning are in his hands, reason enough for the fright that ancient magician had of his wrath.

One day, while in a state of profound meditation, I came in a direct contact with the blessed lord Tlaloc. This great being lives in the Causal world, beyond the body, affections, and the mind. I experienced the tremendous reality of his presence in all of the parts of my Being. Exotically dressed, he looked like an Arab of ancient times. His countenance, impossible to describe with words, incomparable, looked like lightning.

When I reprimanded him for the crime of having accepted many sacrifices of children, women, men, elders, etc.—Tlaloc also appears among the Aztecs and we were referring to those sacrifices—his answer was the following, "That was not my fault. I never demanded those sacrifices; those were things from the people there in the physical world." Thereafter, he concluded with the following words, "I will come again in the Age of Aquarius."

Unquestionably, within a few years the God Tlaloc will reincarnate.

When rain is required for the seed beds of certain tribes of America, they unite their members, assume the position of the toad, and imitate it. Thereafter, they emulate in chorus the "croak," and the outcome is not long in coming.

Ancient magicians called upon the Undines from the rivers and lakes, or the Genii of the clouds, or the Nereids of the boisterous ocean. They exclaimed with a great voice, pronouncing the following mantras,

Therefore, Tlaloc is a God, a Deva from the Causal plane. You can also invoke him, but you must do it with faith and reverence.