Mayan Mysteries: The Stone of Mercury

The Stone of Mercury

This stone is very much destroyed, so it is a little difficult to study.

It has a human countenance.

The positive and negative forces, the mercury and sulfur of the great philosophers, are perfectly symbolized at each side. 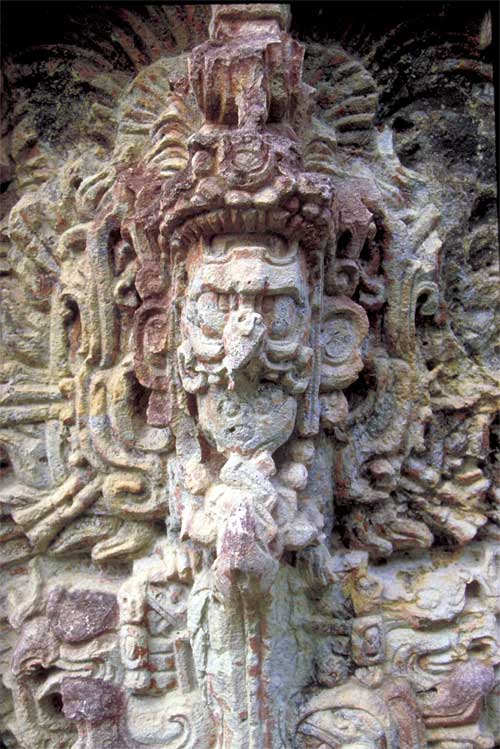 The mercury, in the internal part, takes the shape of pages or sheets of a book. The mercury is nothing other than the metallic soul of the sacred sperm, and is esoterically organized in the shape of sheets or pages of a book; this can be seen by any person that has the Eye of Dangma opened; this is how it is seen: in the shape of sheets of paper. The mercury has been always represented like that on the ancient stones from the north as well as from the wouth, from the east and from the west. We, who know this and who have heard about the book of figures of Nicolas Flamel, do not find any other representation of the mercury and sulfur in their positive and negative form.

The transversal lines show us that the mercury and the sulfur have been transmuted, thus this is how it also appears on distinct sacred books.

All of the populaces of the Earth knew Alchemy and Kabbalah. Nicolas Flamel spoke about Alchemy, and the Mayans are not an exception.

The principles of all metals are salt, sulfur, and mercury.

Mercury alone, or sulfur alone, or salt alone could never give origin to any metal, yet when they are united, they give origin to the diverse metals and minerals. Therefore, it is logical that our philosophical stone must inevitably have these three principles.

Fire is the sulfur in alchemy.

Mercury is the spirit in alchemy.

Salt is the mastery of alchemy.

In order to elaborate the red elixir and the white elixir, we inevitably need a substance in which salt, sulfur, and mercury are found completely pure and perfect. This is because the impurity and the imperfection of the alloy are again found in the amalgam.

However, since nothing can be aggregated to the metals except for the substances that are extracted from them, it is logical that any extracted substance cannot serve us. Therefore, the prima matter of the Great Work must be found within ourselves.

We perfect that substance (the prima matter) according to the art, and this substance is the sacred fire of our organic laboratory. This substance, being semi-solid and semi-liquid, has a pure, clear, white, and red Mercury, and a similar Sulfur. Moreover, this substance possesses two types of salt: one fixed and the other volatile. This prima matter of the Great Work is nothing other than the semen of our sexual glands.

With our science and by means of fire, we transform this marvelous substance in order for it to be millions of times more perfect at the end of the work; thus, this how we elaborate the red elixir and the white.

Arnold of Villanova, Albert the Great, Raymond Lully, and many other Alchemists give the designation of Mercury to the sacred sperm, which is designated as Mercury by the great alchemists.

Change nature so that you may find what you seek.

The semen is transformed into spirit, and the spirit is seminized.

When he opened the path of initiation, the first teaching that the Divine Master gave us was sexual alchemy. Christ transmuted the water into wine at the wedding of Cana.

It is necessary to transmute the water into wine in order to self-realize oneself in depth as Master of the Mahamanvantara.

The mercury is a golden and rare spiritual liquor.

The mercury is the flying eagle of philosophy.

The mercury is our chaos.

The mercury is our semen.

This stela speaks very much; it is a complete, marvelous, and unique book of alchemy.