Spiritual Power of Sound: The Revolution of the Consciousness

The Revolution of the Consciousness

The revolution of the consciousness is the Fifth Gospel.

We urgently need a radical, total, and definitive change. This is only possible by means of the revolution of the consciousness.

The realization of the Inner Self is only possible in isolated individuals, with the help of knowledge and suitable methods. Such an inner revolution can only happen within the individual, and is in fact contrary to the interests of Nature.

What is the most grave of all of this is to know that nobody is obligated to assist the revolutionary individual. Nobody has the slightest intention to help this class of revolutionary. One is completely alone, and if a revolutionary Master resolves to guide us, this is really to have had much luck.

The realization of the Inner Self can only be an urgent necessity for the revolutionary individual, when he realizes his horrible situation and the abominable fate that awaits him, which is the fate of being voraciously swallowed by the mineral kingdom.

The advantage that the separated revolutionary has is that, indeed, he is too small. The existence of one more-or-one-less-machine does not have the smallest importance to the aims of great Nature. If one microscopic cell of our body revolts against us, that does not have the smallest importance, but if all the cells of our body revolt against us, then yes, the matter becomes serious and we go to the doctor in order to fight against this revolution with all the weaponry of science. Exactly the same thing happens in an isolated individual: he is too small to influence all the life of the planetary organism upon which we live, move, and have our Being. Therefore, those who affirm that by means of the evolution of Nature all human beings will sooner or later arrive at the realization of the Inner Self are tremendous liars, fraudulent deceivers, because mechanical Self-realization has never existed, and will never exist.

Jesus Christ, whose nativity we celebrate this night, December 24th, 1965, never promised the kingdom to all human beings. Jesus emphasized the difficulty of entering the kingdom.

Every tree that bringeth not forth good fruit is hewn down, and cast into the fire. - Matthew 7:19

Again, the kingdom of heaven is like unto a net, that was cast into the sea, and gathered of every kind: Which, when it was full, they drew to shore, and sat down, and gathered the good into vessels, but cast the bad away. So shall it be at the end of the world: the angels shall come forth, and sever the wicked from among the just, And shall cast them into the furnace of fire (the mineral kingdom): there shall be wailing and gnashing of teeth. - Matthew 13:47-50

Thus, only the truly revolutionary human being can enter the kingdom of white magic, the kingdom of esotericism, the magis regnum, regnum Dei. Jesus said it:

The kingdom of heaven suffereth violence, and the violent take it by force. – Matthew 11:12 What is normal, what is natural, is that the race of intellectual animals falsely call human falls into the abyss in order to be devoured by Ammut, the devourer of the dead, whose crocodile jaws prefigured all the mouths of Hell of the Middle Ages. This abominable monster, a symbol of the mineral kingdom with its seven atomic, submerged regions, who is partly reptile, partly lion, and partly hippopotamus, and emerges—according to the sayings of the Egyptians—from an ardent, fiery lake, is the devourer of hearts, the devourer of the unvindicated ones, and who—for the Egyptians—symbolized a kind of terrible cosmic vulture, whose function was to consume the remainders or despoliation of humanity. 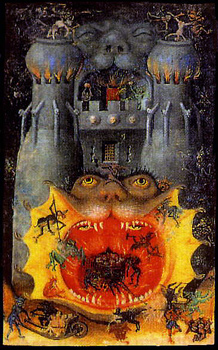