1. When I was in the supra-sensible worlds, two books came into my hands.

2. The first was from Simon the Magician, and the other was from the Samaritan Menander, who reached the pinnacle of magical science.

3. After consulting these two books, I invoked Simon the Magician.

4. I made the invocation in the name of Christ.

6. I then understood that Simon the Magician is the opposite pole of Simon Peter.

7. I entered into a precious abode, where I found Simon the Magician with his college of faithful disciples.

8. When Simon saw me entering, he exclaimed in a rude tone, "You, get out of here."

9. As he approached me, he touched certain chakras of my lower abdomen.

10. I then understood that Simon the Magician is in reality a black magician.

11. I proceeded to defend myself with the flaming sword, and this black magician was astonished before the torrents of burning fire. Thus, without daring to look at my sword, he remained absorbed.

12. I knew Simon the Magician in ancient Rome. I heard him preaching to his disciples.

13. Evilness is so fine and delicate that even the Master H. P. Blavatsky firmly believed that Simon the Magician was a Master of the White Lodge.

14. Master Huiracocha also believed that Simon the Magician was a great Gnostic Master, and he told us that everything that "Papus" and other authors have taught in the past years about magic was taken from Simon the Magician.

15. The only one who was not mistaken with respect to Simon the Magician was Dante Alighieri in his Divine Comedy. 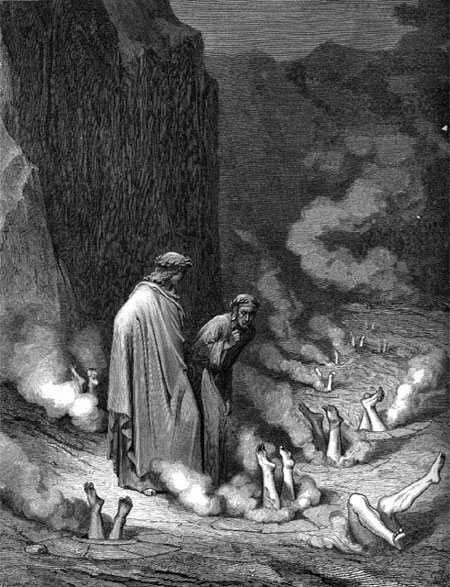 Our Lord demanded of Saint Peter first,
Before he put the keys into his keeping?
Truly he nothing asked but 'Follow me.'

16. Dante called the disciples of Simon the Magician SIMONIACS.

17. The Romans built statues in honor of him, with the inscription, "Simoni Deo Sanctu."

18. However, when attentively studying the books of Simon the Magician, apparently there is nothing that can be condemned as black magic.

19. Evilness is so fine in the world of the mind... Evilness is so delicate and subtle in the plane of cosmic understanding that in reality a lot of intuition is needed in order not to be cheated by the demons of the Mental World.

21. Simon the Magician stated the following:

22. "Now He, (the Father) is One, for whilst he contained that Power within himself he was single; nevertheless he was not the First, although he was pre-existent, but when he was manifested to himself out of himself, he became Second, (or dual). And neither was he named the "Father", before that Power called him Father. In the like manner therefore as the drawing-forth himself out of himself manifested unto himself his own intelligence, so did this Intelligence also, when manifested, not create, but contemplate Him; and thereby stood-up the Father within herself, that is to say, the Power. And this Power (dunanis) and this Intelligence (epinola) like wise is both a male and female Power, on which account they answer to one another, for the Power differs not all from the Intelligence, being one and the same. From that which is above, indeed, is formed the Power, from that which is below, the Intelligence. Of the same kind therefore is the Unity, which is manifested out of them both; for being one it is found to be Twain; both male and female, containing within itself the female. In this manner the Mind exists within the Intelligence; which, when severed from each other, although they are One, are found to be Two." - The Gnostics and their Remains, "Simonianism", Page 68, quoted in The Secret Doctrine

23. Really, whosoever reads this paragraph will not find anything that can condemn Simon the Magician as a black magician.

24. The key is given to us by Dante in his book entitled The Divine Comedy.

25. In Dante's Inferno, he described Simon the Magician and all the sorcerers that he denominated as Simoniacs as walking in the inferno with their heads facing backwards. 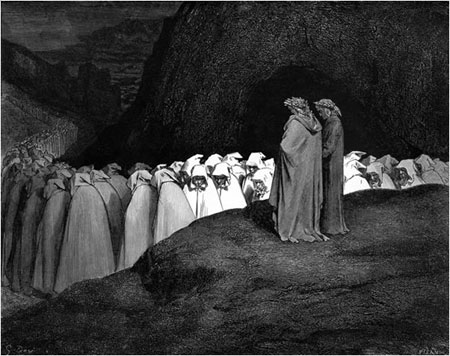 As lower down my sight descended on them,
Wondrously each one seemed to be distorted
From chin to the beginning of the chest;

For towards the reins the countenance was turned,
And backward it behoved them to advance,
As to look forward had been taken from them.

26. The black magic of Simon the Magician is that he remained looking towards the past, and he did not want to accept Christ or the new Christic current.

27. This is a rebellion against the divine hierarchy and, in fact, Simon the Magician remains situated in the worlds of black magic.

29. Simon the Magician saw that the spark was separated from the flame itself, without remembering the words of the Divine Rabbi of Galilee, "..no man cometh unto the Father, but by me."

30. Simon the Magician saw the Father hidden within him, and he wanted to self-realize Him within, but by rejecting Christ. Thus, this in fact is how he fell into black magic.

31. By dint of pride, Simon the Magician fell into black magic.

32. Due to mere pride, Simon the Magician did not want to accept Christ.

33. Something similar is happening now in this twentieth century, with many Spiritualists that do not want to accept my teachings due to mere pride.

34. These types of "Simoniac" beings fall into black magic due to mere pride.

35. Simon the Magician knew the Great Arcanum, and he was completely chaste.

36. The Master Huiracocha, on page fifty of the book The Gnostic Church, quoted a paragraph from the book The Preaching of Simon the Magician, that states:

37. "Unto you I speak in metaphors, but you must comprehend what I say.... There are two Stocks of all the Aeons put together, having neither beginning nor end, springing out of one Root, the which is the INFINITE POWER, the INVISIBLE SILENCE; of which Stocks, the one shows itself from above, the which is a Great Power, understanding of the All, pervading all things, and of the male sex. The other showing itself from below, is the Great Mind, and is of the female sex; generating all things. The resolution of all problems is in the union of the two. The Power Itself is both male and female."

38. At that time, Simon the Magician profoundly knew about sexual alchemy and the Great Arcanum.

39. However, he fell into black magic because he continued to look into the past, and he did not want to accept Christ.

40. The mind is the most dangerous animal of the alchemist.

41. If Simon Magus had dominated the mind with the whip of willpower, he would not have fallen into the abyss.

42. The alchemist who lets himself be carried away by the reasoning of his mind's pride fails in the Great Work and falls into the abyss.

43. The alchemist must be very humble before the divine hierarchies in order not to fail in the Great Work.

44. The mind must become as a humble and simple child.

45. The mind must humiliate itself before the divine hierarchies.

46. The mind must humiliate itself before the majesty of the Innermost.

47. It is impossible to rise to the Father without elaborating the Child of Gold of sexual alchemy.

48. This Child of Gold is the intimate Christ.

49. It is necessary to form Christ within ourselves in order to rise to the Father.

50. Very subtle dangers are present in the work of the blessed stone that the alchemist must courageously conjure.

51. There are black magicians in the Mental World who appear as adepts of the White Fraternity.

52. These black magicians have a sublime appearance and an exquisite spiritual culture.

53. When these Magicians speak, they speak only of love, light, truth, and justice.

54. They appear as ineffable beings, and we discover that they are black magicians only when they advise us, in a very fine and delicate tone, to ejaculate the semen.

55. If in that moment we shout, "Hail, Christ! Down with Javhe!" we will then see them stand angrily against us in order to force us to leave their abode.

56. All these brothers and sisters of the darkness advise seminal ejaculation, and they hate the Christic force.

57. Thus, evilness vests itself with subtle deceitfulness. Therefore, the disciple must open his eyes very well, and be as alert and vigilant as a watchman in a time of war.

58. There are adepts of darkness who disguise themselves as Mahatmas and present themselves before us in the internal worlds. This is in order to tell us that we have fallen and have failed in our longing for the light, and that we have lost the degrees that we had acquired, etc.

59. Therefore, if the disciple slips on this banana peel, he inevitably falls into the abyss.

60. The mind must not rationalize.

61. The mind must flow integrally, without the battle of antitheses. The mind must convert itself into a flexible and delicate instrument through which the majesty of the Innermost can be expressed.

62. Pride caused Simon the Magician to fall into the abyss of black magic.

63. "And when Simon saw that through laying on of the apostles hands the Holy Ghost was given, he offered them money,

64. "Saying, Give me also this power, that on whomsoever I lay hands, he may receive the Holy Ghost.

65. "But Peter said unto him, thy money perish with thee, because thou has thought that the gift of God may be purchased with money.

66. "Thou hast neither part nor lot in this matter; for thy heart is not right in the sight of God.

67. "Repent therefore of this thy wickedness, and pray God, if perhaps the thought of thy heart may be forgiven thee.

68. "For I perceive that thou art in the gall of bitterness, and in the bond of iniquity.

70. With these verses of the sacred scriptures, our affirmation is absolutely proven that Simon Magus is a very dangerous black magician.