Alchemy and Kabbalah in the Tarot: Arcanum 15 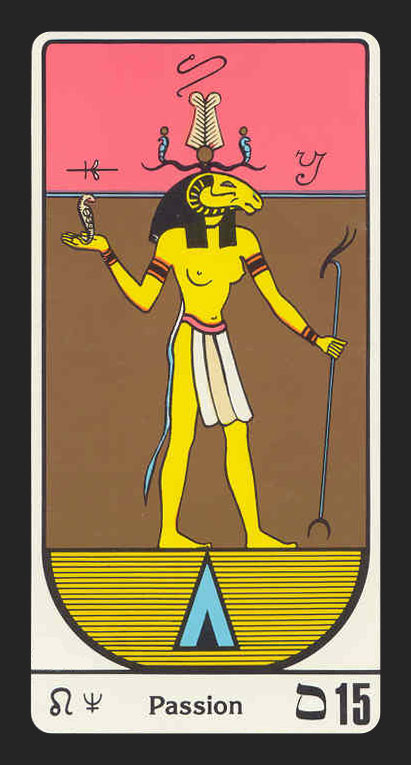 We need to develop the Kundalini and to dissolve the “I,” only in this way can we attain liberation.

The Work with the Demon

The Initiates of the fourth path, which is “The Path of the Astute Man,” choose “to work with the devil” on the process of the dissolution of their “I.” The tenebrous ones violently attack anyone who works in the dissolution of their “I”; this is why even though they are not demons they are, nonetheless used to being surrounded by demons. When non-initiated seers, clairvoyantly see a human being like this, they mistakenly misjudge him and end up calumniating him when qualifying him as a demon. The initiates of “The Path of the Astute Man” become enigmatic. Disciples from the path become confused when they contemplate black candles upon the altars of these initiates; then, as usual, they mistakenly misjudge them.

Techniques for the Dissolution of the Ego

The “I” exerts control upon the five inferior centers of the human machine; these five centers are the: intellectual, emotional, motor (movement), instinctual, and sexual.

Two people react differently before any given representation; what is pleasant for one person could be unpleasant for the other. The difference lies in the fact that one person judges and perceives the representation through his mind while the other does it through his feelings (the representation touches his feelings). Therefore, we must learn how to differentiate the mind from the sentiment. One thing is the mind and another is the sentiment. Within the mind there exists an entire play of actions and reactions that must be carefully comprehended; within our sentiments exist affections that must be crucified, emotions that must be studied and in general an entire mechanism of actions and reactions that can easily be misplaced and confounded with the activities of the mind.

There exist various types of instincts: the instinct of preservation, the sexual instinct, etc. Many perversions of instinct also exist.

Deep within every human being there exist sub-human, instinctual forces that paralyze the true spirit of love and charity. These demonic forces must first be comprehended, then brought under control and eliminated. These bestial forces are: criminal instincts, lust, cowardliness, fear, etc. We must comprehend and subdue these bestial forces before we can dissolve them.

Sex is the fifth power of the human being. Sex can liberate or enslave the human being. No one can attain integrity, no one can be deeply Self-realized, without sexual energy. Sex is the power of the Soul. The integral human being is achieved with the absolute fusion of the masculine and feminine poles of the Soul. Sexual force develops, evolves and progresses on seven levels (the seven levels of the Soul). In the physical world, sex is a blind force of mutual attraction. In the astral, sexual attraction is based on the affinity of types according to their polarities and essences. In the mental plane, sexual attraction occurs according to the laws of mental polarity and affinity. In the causal plane, sexual attraction takes place on the basis of conscious will. It is precisely on this plane of natural causes where the complete union of the soul is consciously performed. Indeed, no one can attain the complete glory of the Perfect Matrimony without having attained this fourth state of human integration.

We need to comprehend in depth the entire sexual problem. We must transcend the mechanicity of sex. We need to know how to procreate children of wisdom.

In the supreme moment of conception, human essences are completely open to all types of influences. Thus, the state of purity of the parents and their willpower used in order not to spill the Cup of Hermes, is all that can protect us against the terrible danger that the spermatozoon and the ovum face regarding the infiltration of subhuman substances of the bestial egos which want to reincorporate.

Since a woman’s body is a passive and receptive element, it is clear that her body collects and stores more of the results of the sexual acts than all of those men who commit adultery with her; those results are atomic substances from the men with whom she has had sexual intercourse. Therefore, when someone has sexual intercourse with a person who has been with another partner or other partners, both then absorb the atomic essences of the other partners and poison themselves with them. This is a very grave problem for those brothers and sisters who are dissolving the “I” because then, not only do they have to fight against their own errors and defects, but more over, they have to fight against the errors and defects of those other partners with whom they had sexual intercourse.

We discover the entire process of the “I” by comprehending the inner activities of each one of the five inferior centers. The outcome of this self-discovery is the absolute death of Baphomet or Satan (the tenebrous lunar “I” or sinning Adam).

We Need to Be Integral

The Mystery of Baphomet

It is indeed true and certain that the mystery of Baphomet is Sexual Alchemy. We transform the lead of our personality into the gold of the spirit based on rigorous comprehension and sexual transmutation. This is how the “I” is annihilated. The rose elaborates its perfume with the mud of the earth; the perfume of the rose is transmuted mud.

The Door of Eden

Sex is the door of Eden. The guardian of this door is the Assyrian sphinx, the Egyptian sphinx, the bull (golden calf) of Moses with the sword between its paws. This is the psychological “I” reflected in the Baphomet that with his sword drives out from the threshold all of those who are not prepared. The enemy is within us; we need to work with the demon in order to dissolve it. We need to steal the fire from the devil.